The Akashi-Kaikyo Bridge, spanning Kobe and Awaji Island, is the world’s second longest suspension bridge. It has a total length of 3,911 meters with a suspension of 1,991 meters, and sits 297 meters above sea level. Believe it or not, you can actually take a tour to the top of the suspension towers. The tour guides were directly involved in the bridge’s construction and lead visitors through the normally inaccessible maintenance access ways and elevators to the 98th floor (300 meters above sea level). Here, the view at the top is breathtaking. The 360° panorama encapsulates both the sea of buildings on the Kobe side and the rich green of Awaji Island on the other. Normally places only used for bridge inspection and maintenance, the proximity to the huge suspension cables holding everything up gives you a true feel for scale. If you join one, you’ll understand why the tour is quite popular and bookings fill up early.

Completed in 1998, Akashi-Kaikyo Bridge was originally an architectural dream that would combine a wealth of engineering technology with Japanese technical capability. It was built to withstand the 4.5 meter-per-second tidal flows in the channel below, wind speeds of 80m/s, and large earthquakes. There was not a single fatality in its 10-year construction period, even though the Great Hanshin Earthquake struck when it was half-built in 1995. At the time, both towers had been completed, but the main cable was still under construction. An inspection was performed soon after the earthquake revealing that the bridge itself had sustained no damage, and so construction work continued. Its earthquake resistant design had just proved itself worthy.
After completion, a groundbreaking cable maintenance technology was created and implemented, with inspections enforced daily. The rigorous maintenance schedule allows the bridge to be used for the next 200 years. This leading engineering technology used to build Akashi-Kaikyo Bridge is still alive today, and has been leveraged in other large-scale international bridge projects.

More to see and do
A world-first bridge cable illumination

The Akashi-Kaikyo Bridge Exhibition Centre covers technological aspects about the bridge, and there’s a 360° VR exhibit to experience as well, with panoramic views from the top. The Maiko Marine Promenade hangs between the bridge girders underneath, and offers the thrilling experience of a log crossing and glass floors 47 meters over the water, or the chance to relax with the view at Tom’s cafe. In the evening, the Akashi-Kaikyo Bridge illumination is worth the view. A world-first, each individual light is made up of three lamps in RGB colour, which change over time. The gentle curves of the cables are a prominent evening exhibit. 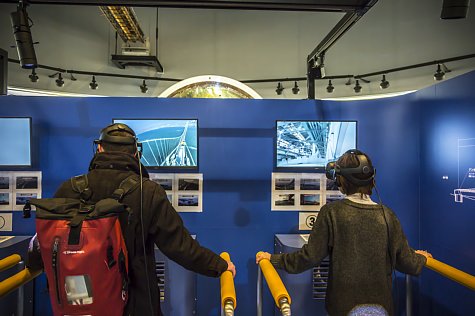 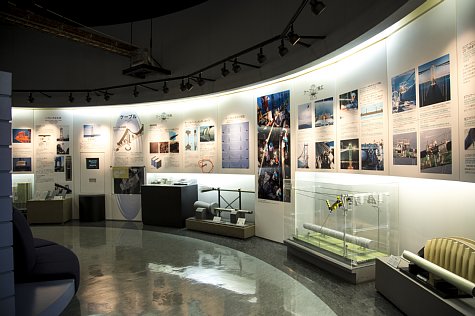 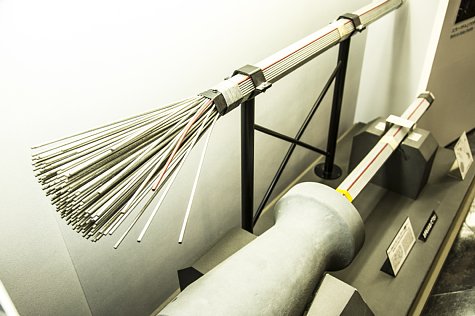 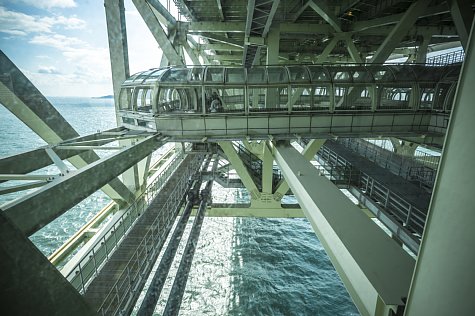